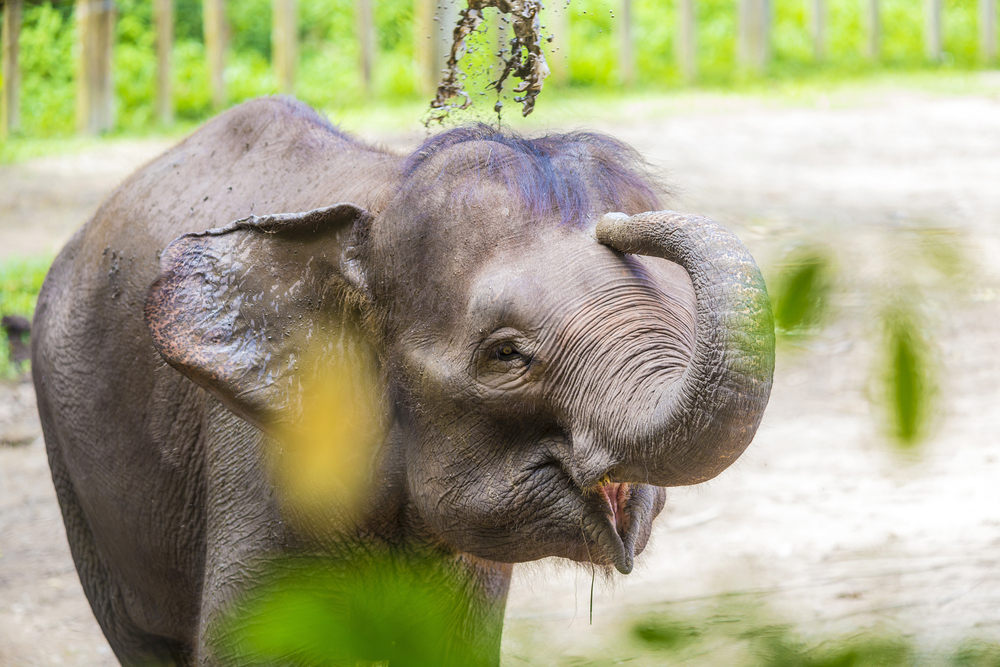 For months farmers in Odisha have been battling to prevent elephants from raiding vegetables, fruits and paddy. Miles of trenches and solar fencing have all failed to prevent the incursions, but now a newly installed low cost lighting system is showing signs of success.
Flashing LED lights suspended on bamboo poles have been installed at sixty metre intervals across forty-five acres of crops. The lights were placed so they would be at the elephant’s eye level, while being visible from a long distance.

Despite the fields being full of tomatoes, pumpkins and bananas, the elephants have opted to keep their distance from the illuminated crops.

‘The light system has been designed based on our field experience with elephants and their habits,’ Biswajit Mohanty, project director at the Wildlife Protection Society of India (WPSI) told The Hindu newspaper.

‘We knew that the elephants would be scared of flashing lights instead of fixed and powerful lights. We developed this design using low power LED bulbs used as strobes.’

The LED system was also used during the lucrative Indian mango season, which runs from April to June.

Hopefully the lights will be popular with farmers so that they can sleep peacefully instead of chasing elephants all night.
Biswajit Mohanty – The Wildlife Protection Society of India

‘I used to incur huge losses due to elephant herds entering my orchards and attacking mango trees,’ Odisha farmer Jugal Kishore Nayak told The Hindu. ‘But this year, the lighting system has kept the elephants at bay.’

The WPSI now plans to develop a prototype self-contained lighting unit, with an in-built solar charger, which will make the fixtures easier to maintain.

‘Hopefully the lights will be popular with farmers so that they can sleep peacefully instead of chasing elephants all night,’ Biswajit Mohanty concluded.

The Indian farmer’s elephant problem is much more serious than a few ravenous mammals stealing fruit and vegetables. Odisha has lost more than 700 elephants and 700 people during man-elephant conflicts since 2004. During the same period, elephants trampled ready-to-harvest crops across 90,000 acres of land.

The experiment assumes extra significance as elephants have now started coming out of the forest throughout the year instead of only during harvest seasons.

Taken from Lux – Live 2016 – http://luxreview.com/article/2016/08/-led-keeps-rampaging-indian-elephants-at-bay-
Please visit the site and find out so much more about the revolutionise your Lighting

We use cookies on our website to give you the most relevant experience by remembering your preferences and repeat visits. By clicking “Accept All”, you consent to the use of ALL the cookies. However, you may visit "Cookie Settings" to provide a controlled consent.
Cookie SettingsAccept All
Manage consent

This website uses cookies to improve your experience while you navigate through the website. Out of these, the cookies that are categorized as necessary are stored on your browser as they are essential for the working of basic functionalities of the website. We also use third-party cookies that help us analyze and understand how you use this website. These cookies will be stored in your browser only with your consent. You also have the option to opt-out of these cookies. But opting out of some of these cookies may affect your browsing experience.
Necessary Always Enabled
Necessary cookies are absolutely essential for the website to function properly. These cookies ensure basic functionalities and security features of the website, anonymously.
Functional
Functional cookies help to perform certain functionalities like sharing the content of the website on social media platforms, collect feedbacks, and other third-party features.
Performance
Performance cookies are used to understand and analyze the key performance indexes of the website which helps in delivering a better user experience for the visitors.
Analytics
Analytical cookies are used to understand how visitors interact with the website. These cookies help provide information on metrics the number of visitors, bounce rate, traffic source, etc.
Advertisement
Advertisement cookies are used to provide visitors with relevant ads and marketing campaigns. These cookies track visitors across websites and collect information to provide customized ads.
Others
Other uncategorized cookies are those that are being analyzed and have not been classified into a category as yet.
SAVE & ACCEPT